The latest GCC E-Performance Index 2022 reveals that all countries from the Gulf Cooperation Council (GCC) region have performed exceptionally well, displaying significant progress in digital transformation. As per the…

Dubai Electricity and Water Authority’s (DEWA’s) use of the latest innovative technologies contributes to enhancing efficiency at the Jebel Ali Power Generation & Water Production Complex, which is one of…

At a time when Europe is struggling with high electricity bills as a result of reduced energy supplies from Russia, the market for smart electricity meters is set for robust…

Abu Dhabi is focusing on stemming the impacts of climate change through various stringent policies and initiatives. Aligning to this objective, the Department of Municipalities and Transport (DMT) has put…

The Ministry of Industry and Advanced Technology (MoIAT) and du, from Emirates Integrated Telecommunications Company (EITC), signed an MoU during ADIPEC 2022 whereby du will join the UAE’s Champions 4.0…

How Singapore Is Bringing Homes and Nature Parks Closer

du to Develop 5G Centre of Excellence in Masdar City

A Glimpse of a Holographic Future with Microsoft HoloLens

Many of these mid-range transport options have faced many challenges, however, including cost-effectiveness, non-electrification, poor infrastructure, etc., and have even proven somewhat insufficient given the increase of daily commuters in cities. To meet this growing need, the introduction of a relatively new system of transport has been catching everyone’s fancy – these are the trackless trams.

What Is a Trackless Tram?

A trackless tram is a battery-powered, rubber-tired vehicle, unlike a rail-mounted train. It also goes by other names, such as parking lot tram, land train, road train, etc. A typical trackless tram comprises an engine unit pulling several carriages, like that of a railway train. Its engine can be internal combustion or electric-powered. Perhaps the best advantage of trackless trains over their rail-mounted counterparts is that they can operate without infrastructure (tracks, overhead contact wires, etc.), and their bi-directional design allows more maneuverability that is suitable for vehicular roads. 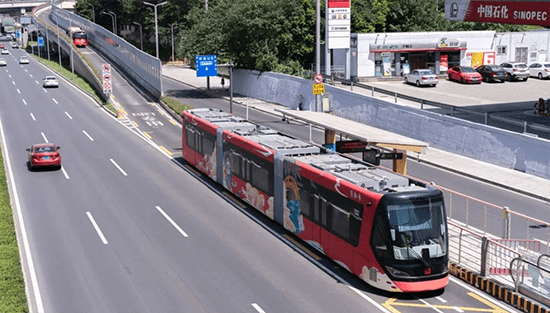 Autonomous rapid transit (ART) developed by CRRC during a trial operation with passengers onboard in Chengdu, China.

Other pluses of the trackless tram are that it is less costly than light rail, faster and sleeker than buses, and carbon-neutral since it runs on battery power. Various models of trackless trams have been in development for decades, but the modern version came onto the world’s radar in 2017, when the Chinese Rail Corporation, CRRC, introduced an autonomously guided tram with advanced design and technology called Autonomous Rapid Transit (ART). The ART system offered a good quality ride at a lower cost without the need to install rail infrastructure on roads. The vehicles use optical light detection and ranging radar(LiDAR) and GPS technology to operate autonomously along the virtual track painted on the road. Although the term “autonomous” is attached to the technology category, the latest models are operated by drivers.

With the push for cleaner modes of transportation gaining global momentum and with the advances in battery and charging technologies, trackless trams are well poised to become the best alternative to more carbon-emitting options. ART has been operational in China since 2018 with plans for route expansion. ART has the characteristics of strong transportation capability, low-carbon and environmental friendliness, and high speed. Countries including Malaysia, Zimbabwe, Australia and others have proposed the installation and implementation of trackless trams.

Experts suggest that installing trackless trams on the outskirts of cities can improve access to public transport, resulting in the use of fewer cars and fewer carbon emissions. They also hope that this will encourage people to move to these outlying areas, thus helping to decongest the urban populations as well. Trackless trams are less polluting, more cost-efficient, and more noise-free than buses.

Experts believe that ART technology in itself is a remarkable innovation in public transport. However, each city must draw plans meticulously to optimally execute the system in accordance with its unique public infrastructure. As such, the development of this new public transport warrants a focused public and private collaboration in fostering the policies and regulations that can best leverage the promising technology and a more mobile future.