Dubai has emerged number 1 in a Smart City Index that studied 10 Gulf cities’ strategy and execution of smart city campaigns. Dubai stood out for its strategic vision coupled with a clear understanding of the practical requirements to deliver on its vision, in a study released by Huawei and Navigant on the first day of GITEX 2016.

The study was undertaken by global research firm Navigant and commissioned by Huawei with the aim of understanding the level of readiness of cities in the region for the next level of smart city adoption and deployment.

Safder Nazir, Vice President of Smart Cities & IoT, Huawei, Middle East said: “As countries in the Gulf are increasingly diversifying their economies away from fossil fuels, they are also coping with the need for rapid digitalization in business and government. Huawei is committed to helping countries in the region in their digital transformation through smart city initiatives that are customized to meet specific needs. We undertook the Gulf States Smart City Index in order to better understand the current levels of readiness of different cities so that we are better able to serve this region.”

The study found that the foundation laid by Dubai’s leaders and the Smart Dubai Office provides an excellent basis for a range of innovations that have a significant impact on the city’s operations and quality of life.

Eric Woods, research director at Navigant Consulting, who led the study, said: “Dubai stands out in this Navigant Research ranking as a Leader among cities for its strategic vision and ambitious implementation program. Overall, cities in the region are expanding their digital infrastructures, developing new services, and investing in large-scale building programs. The emerging focus on open data and data analytics programs is an important next step. This will be one of the most important developments in the next stage of smart city evolution in the Gulf region.”

The Smart Dubai roadmap has targeted the delivery of 1,000 services by 2017 across 100 initiatives. As of September 2016, it had documented more than 500 current and planned smart services and initiatives, of which 150 have been completed. With innovative programs such as Dubai Data Initiative for data sharing and data analytics, smart mobility solutions for traffic control, a smarter grid program for better management of power and water consumption, smart health services, smart police force and other mobile-enabled e-Government services, the city is a leading example of how smart city strategies need to evolve and be refreshed to maintain focus and momentum. 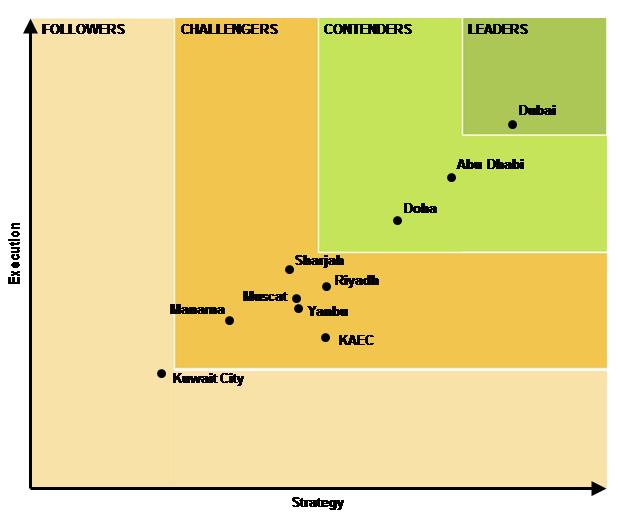 The study profiled seventeen cities and developed an index of ten cities categorizing each of the ten as Leader, Contender, Challenger or Follower. The in-depth analysis of each cities initiatives as well as lessons to be learnt from the early adopters has been published in a whitepaper.